Optimizing the Tradeoff: Cost vs. Quality in Service and Support 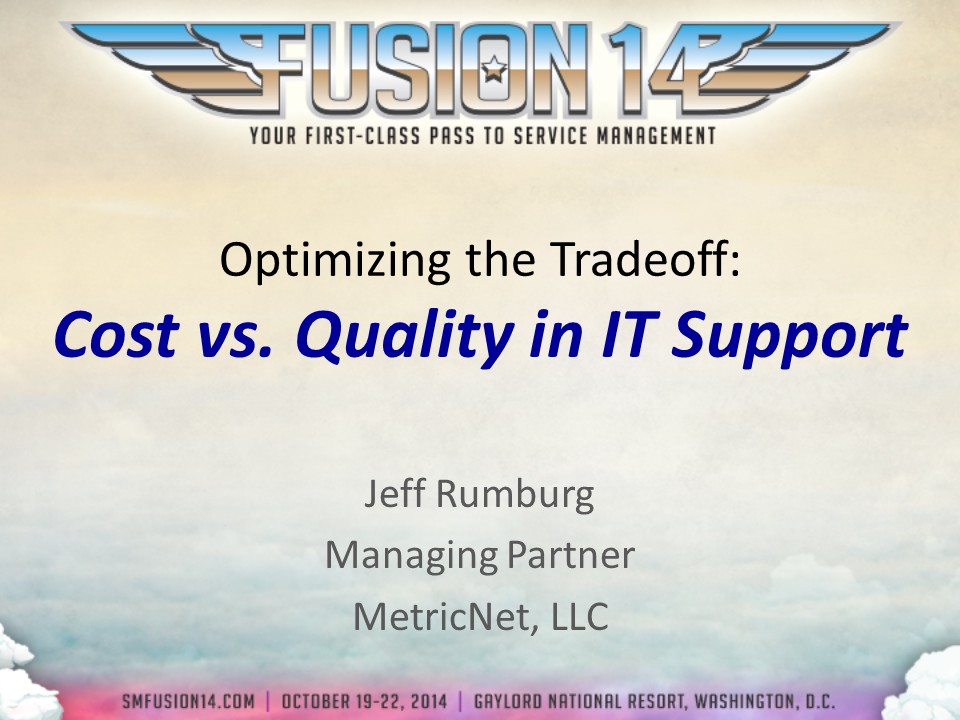 The One Year Path to World-Class Performance

The One Year Path to World-Class Performance, a Continuous Improvement Program, is designed for Service Desks, Desktop Support organizations and Call Centers. This proven MetricNet Certified solution includes annual benchmarking, an annual ROI calculation (return on investment), training sessions on metrics and key performance indicators, and the development of standardized reports that convey a simple yet compelling story of performance. The overall initiative is summarized below.

The initial benchmark and ROI calculation will establish a performance baseline, and identify improvement opportunities. The initial benchmark will be followed by a 6-9 month improvement phase where the benchmarking recommendations will be implemented. Finally, a second benchmark and ROI calculation will be conducted approximately one year after the first benchmark to solidify the performance gains, and to objectively demonstrate the progress that has been made since the start of the program. Download the full summary.

People, process, and technology are considered the fundamental building blocks of IT service and support. In fact, this refrain has become the default paradigm for organizations that are in the business of delivering technical service and support to end users. The idea is to invest first in human resources, through effective recruiting, training, coaching, and career management. Then build standardized, repeatable processes, presumably within an ITIL framework, that permit the human resources to carry out their jobs in an efficient and effective manner. Finally, technology is an enabler to automate key processes, reduce cycle times, facilitate user self-help, and maximize the percentage of incidents resolved remotely.

This simple paradigm has intuitive appeal, and most who work in the IT service and support industry buy into it. But what has emerged in the industry in recent years is an even more fundamental building block than people, process, and technology. That building block is metrics, or more accurately, the discipline of performance measurement and management.  Without an effective metrics discipline continuous improvement and maturation is virtually impossible.

The simple fact is this: benchmarking is the most effective, proven methodology for bridging the gap to world-class performance for service desks, desktop support organizations and call centers that are serious about improving their performance.

[This guest post was written by Ashley Verrill, an analyst for Software Advice, as well as the managing editor for the Customer Service Investigator blog.]

Many call center operators assume that turnover is just a fact of life. No amount of training or incentive will ever truly mitigate the trend, so why try?

While retention will likely always be a challenge in call centers, researchers have discovered a few psychologically-based tactics that have proven successful. Recently, we interviewed several call center technology experts, hiring strategists and other thought leaders to investigate these emerging trends. We’ve analyzed three here.

Zappos is known worldwide for the quality of its customer service. The founder, Tony Hsieh, literally wrote the book on the topic, Delivering Happiness, which staked claim on The New York Times Best Sellers list for 27 consecutive weeks. I interviewed the company’s Customer Loyalty Operations Manager Derek Carder, who attributed this success in part to his team’s longer than average work tenure. How do they do this? They emphasize personal ownership of each call and strategic thinking.

While most call centers value quick time-to-resolution, Zappos encourages call center agents to spend as much time on the phone as they deem necessary to satisfy the customer. They are still required to spend at least 80 percent of their time interacting with customers, but it doesn’t matter if that’s 100 calls or 20. The worker is asked to build rapport with each caller, but they have autonomy in that they figure out the best approach for doing this.

Carder gave the example of a customer who called to find shoes for a wedding. Zappos didn’t have the shoe in stock, so the agent looked at four other sites. They didn’t have them, either. So, she called a mall, talked to the manager and found a store that had the right pair. She purchased the shoes and personally mailed them to the customer. While the agent did receive a “Happiness Experience Score” (a Zappos performance measurement), she used her own best judgement to design the tactic for solving the problem.

“High performance is that unseen intrinsic drive, the drive to do things because they matter,” says Daniel Pink, a best-selling business author of newly released To Sell is Human, a book about the changing world of work. “I believe that includes three elements: autonomy, mastery and purpose.”

Giving workers purpose can mean at least three things. The first is literally giving them a philanthropic purpose. Appletree Answers, for example, experienced some serious growing pains several years ago after acquiring a few competitors. The call center grew to 350 employees and shortly afterwards experienced a turnover rate of 97 percent.

The company tried attacking the problem with competitions, games and other incentives. But nothing worked until they launched the Dream On program in 2008—an initiative aimed at encouraging employees to help each other achieve their dreams. Six months and 100 dreams later, attrition decreased to 33 percent, $1 million was saved in hiring and training costs and the company experienced its two most profitable quarters ever.

In addition to creating this kind of purpose at work, Dr. Adam Grant, a management professor at Wharton and author of Give and Take: A Revolutionary Approach to Success, conducted a series of call center experiments that proved the effectiveness of “outsourcing inspiration.”

This tactic is based on connecting workers with the actual recipients of their efforts (the customers, clients, or other people they speak to everyday) as a means for generating motivation. This can be done by literally having agents meet these people in person, or by showcasing customer photos, sharing their stories and having agents describe their own positive experiences with customers.

Dr. Grant said connecting call center workers with beneficiaries “appears to be a promising catalyst in the art of motivation maintenance.”

A final way to enforce purpose is through giving workers a stake in the overall success of the business. Pink suggested one tactic – creating a “genius hour,” or asking agents to leave the phones for one hour every week to come up with improvements in processes, new ways to handle workflow or other ideas.

One final way call centers can reduce turnover is by hiring the right people. This sounds obvious, but if you are just looking at work history, this might be your mistake.

An emerging field called “workforce science” is based on hiring people for their personality traits. Researchers analyze the behaviors of the most successful workers, then uses those to identify what personality traits make a candidate psychologically-predisposed to being ideal for a specific kind of work environment.

Evolv’s researchers have discovered that many traits commonly screened for in the hiring process don’t accurately predict job performance. For example, their experts analyzed data from 21,115 call center agents and found that “previous employment duration is a very weak predictor of how long a new hire will stay on a job.” Instead, the data shows that a person’s creativity, curiosity and ability to multitask correlate more strongly with how long they might stay on the job. While call centers each have unique requirements, most traits identified as predictors of retention are relevant to all of them.

What tactics have you found most successful to addressing turnover? Join the conversation with a comment here.

Ashley Verrill is an analyst for Software Advice, as well as the managing editor for the Customer Service Investigator blog. She has spent the last six years reporting and writing business news and strategy features. Her work has been featured or cited in Inc., Forbes, Business Insider, GigaOM, CIO.com, Yahoo News, the Upstart Business Journal, the Austin Business Journal and the North Bay Business Journal, among others.

The pursuit of customer satisfaction through continuous improvement programs is high on most Call Center and IT Service Desk agendas, yet most still fail to understand the totality of customer expectations and therefore deliver services that miss the mark. Fewer than than 25% of enterprises have institutionalized a successful customer satisfaction measurement and management system that works.

The fact is, most of the investments in customer satisfaction research made annually by Call Centers and IT Service Desks are no better prepared in predicting future actions of users than a Richter Scale is in predicting how severe an earthquake will be. Both tell you what has happened, but neither tells you what will happen.

Based on MetricNet’s empirical observations from more than 1,700 benchmarks, attendees of this session will learn:

• What most CSAT programs really measure

• Why some Call Centers and IT Service Desks may be very responsive, supportive, and efficient and still have a negative perception among their customer community

Audience members will come away from the session with a number of action items, including:

• World-class strategies for maximizing customer enthusiasm, measuring the voice of your customers and detecting the value shifts of your user population

Date: Tuesday, August 9th, 2011 2:00 PM – 3:30 PM EDT (GMT – 4:00)
If the time zone or timing of these webcasts do not match your schedule, I would encourage you to sign up anyway as the system will automatically send you the recording later (but only if you register).

***For a complete listing of MetricNet’s 2011 webcasts, click here: http://www.metricnet.com/webcasts.html